Here you can download the latest version of Futsal Rules - FUTSAL_-_Laws_of_the_Game_2022-2023_EN.pdf 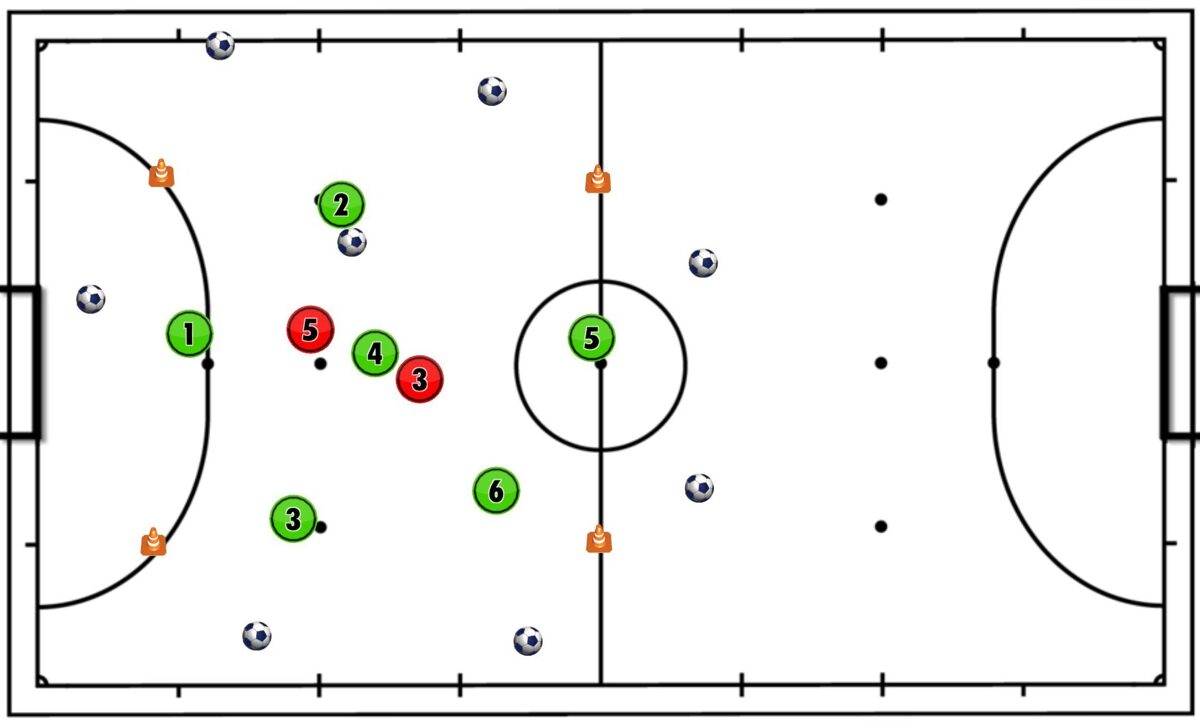 Download a FREE Print-Ready PDF with this drill - HERE

How to improve futsal combinational play and precision

· Both teams can use each half of the pitch to score a goal.

· The main rules is that there can only be 2 defending players and 3 attacking players on the half, where the ball is.

· The goal can only be scored with the first touch shot.

Duration: 2 games of 10 minutes each

DOWNLOAD ILUSTRATED PDF with the description of this drill  - HERE

HOW TO IMPROVE POSSESSION OF THE BALL IN FUTSAL 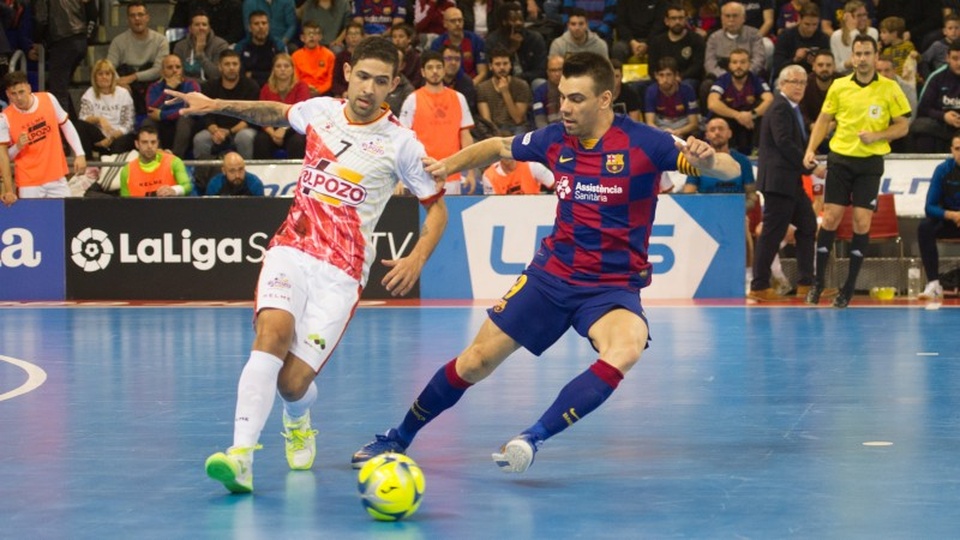 Futsal started in 1930 when Juan Carlos Ceriani, a teacher in Montevideo, Uruguay, created a version of indoor football for YMCAs.

Originally developed for basketball courts, a rule book for the new sport was published in September 1933. Association football (soccer) was already highly popular in the country, and after Uruguay won the 1930 World Cup and gold medals in the 1924 and 1928 Summer Olympics, it attracted even more practitioners. Ceriani's goal was to create a team game similar to football that could be played indoors or outdoors.
While writing the rule book, Ceriani combined the principles of association football—where the ball may be touched with every part of the body except the hands—with rules from other sports: from basketball, the number of players (five per team) and the game's duration (40 active minutes); from water polo, the goalkeeping rules; and from team handball, the field and goal sizes.
The YMCA spread the game immediately throughout South America. It was easily played by everyone, everywhere, and in any weather condition, helping players of other sports stay in shape all year round. These reasons convinced João Lotufo, a Brazilian, to bring the game to his country and adapt it to the needs of physical education.
Initially, the rules were not uniform. In 1956, the rules were modified by Habib Maphuz and Luiz Gonzaga de Oliveira Fernandes within the YMCA of São Paulo, Brazil, to allow seniors to compete. Luiz de Oliveira wrote the Book of Rules of Futsal in 1956, then adopted also at the international level.
In 1965, the Confederación Sudamericana de Fútbol de Salón (South American Futsal Confederation) was formed, consisting of Uruguay, Brazil, Paraguay, Peru, and Argentina.

HOW TO IMPROVE POSSESSION OF THE BALL IN FUTSAL (VIDEO)

How to improve possession of the ball in futsal 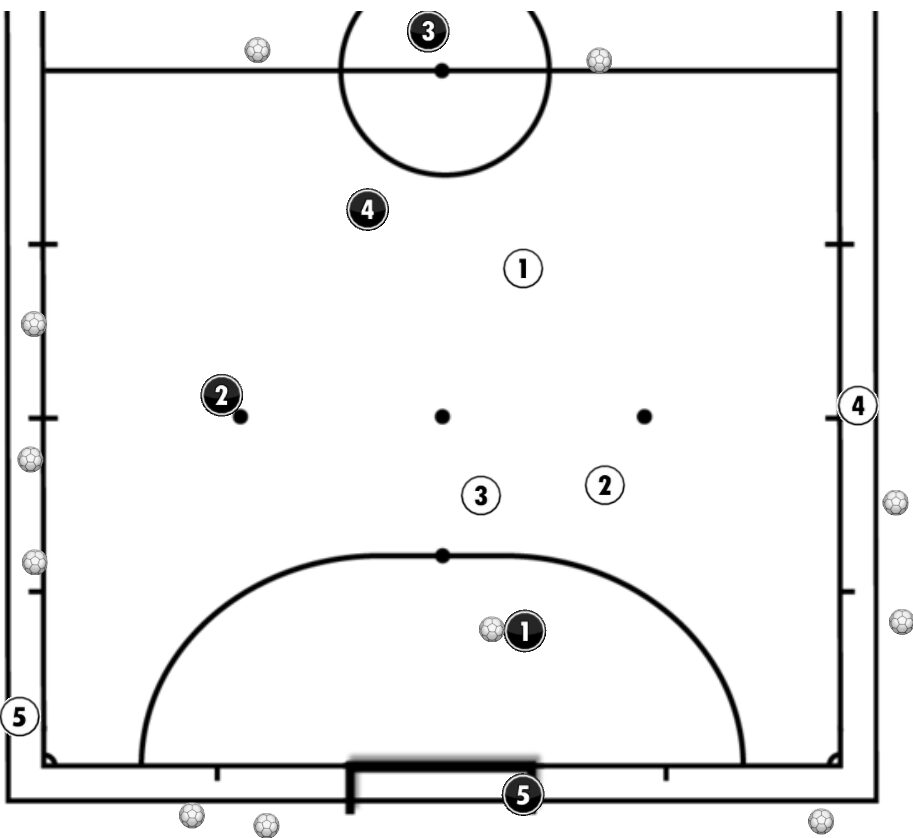 The objective of each team is to make at least 15 consecutive passes together. 15 passes are made (without losing the ball) - 1 point is scored.

Each player has the limit of 3 touches on the ball (means - with the third touch he should pass the ball). Passes can be made to neutral players. If neutral player receives a pass, he should enter the pitch and the one, who passes the ball, should become a neutral player (players exchange their roles).

Duration: 3 games of 5 minutes each

How to open-up for a pass: Drill to improve creating passing lines 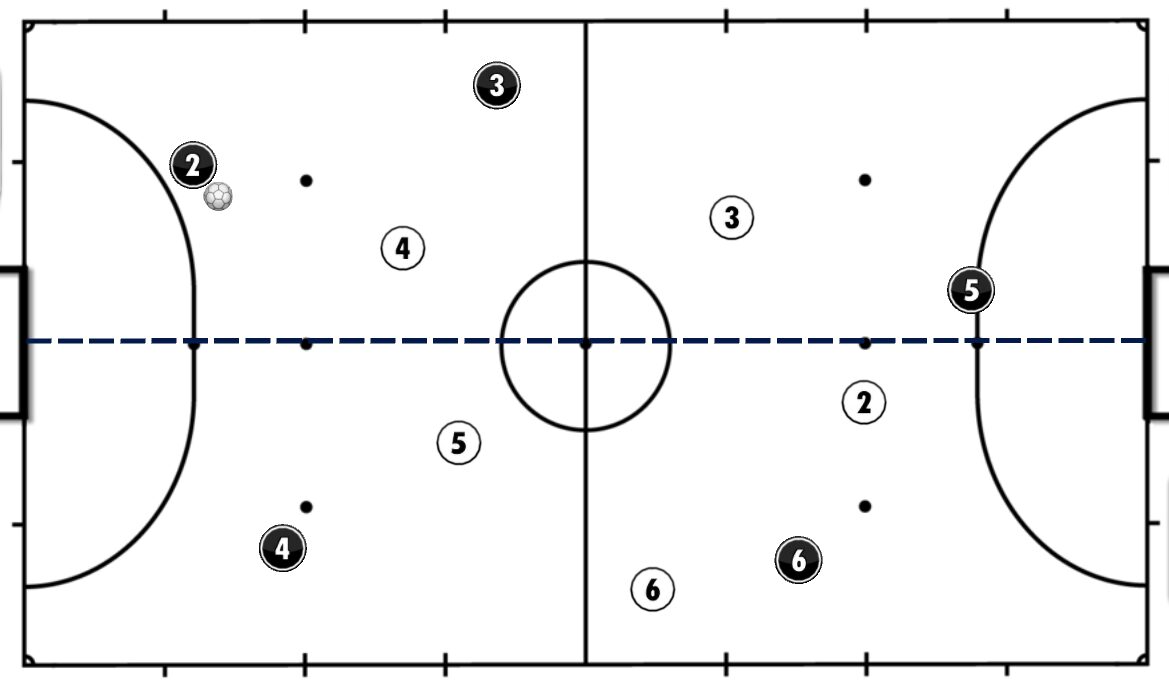 Set-up: full pitch, no goal-keepers, 5 fields players in each of two teams, no goals, at least 1 ball.

The pitch is divided into 4 equal zones. The rules is, that ”at any point of time in one zone there can only be maximum 2 players of one team”. The objective of each team is make 10 consecutive passes. 10 passes are made (without losing the ball) - 1 point is scored.

If a third player of the same team enters a zone, the ball should be given to an opponent.

Duration: 2 games of 10 minutes each

Variations: Put a goal-keeper in goals. Now team would have 1 goal-keeper and 5 field players each. Play normal futsal game. The restriction “maximum two players of each team in one zone at any point of time” remains.

How to play 5v4 - Futsal Drill 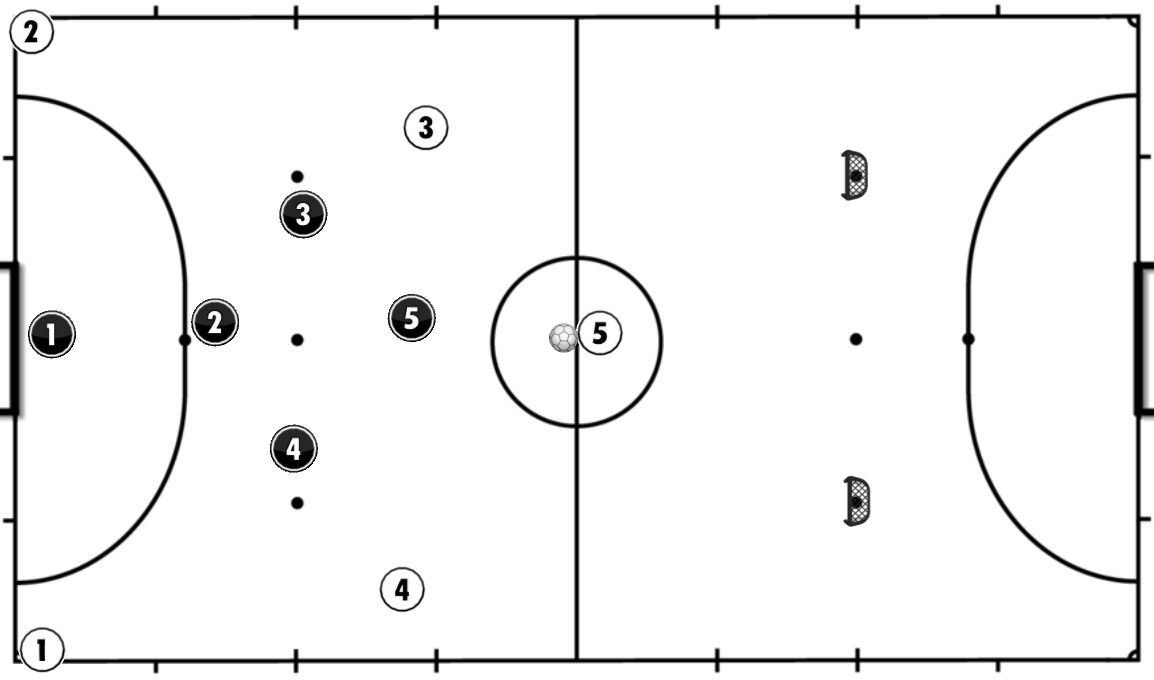 Objective: Learn to play 5v4 situations (both in defense and in attack)

Black team has two options: to score in futsal (big) goal or in any of two smaller goals. If black team scores in smaller goals it counts as one point.

P.S. Make sure, teams switch sides every 10 minutes. That is needed for every player to experience different roles.

In this video we will learn to use futsal powerplay. Both in defense and attack. Futsal 5v4 situations are very frequent thing, so every team must be ready to defend in 5v4 and also to attack in 5v4. The drill, which is represented in this video will help you coach a team to play futsal powerplay. This drill can be used by any team. Even by teams with no training process or a coach. 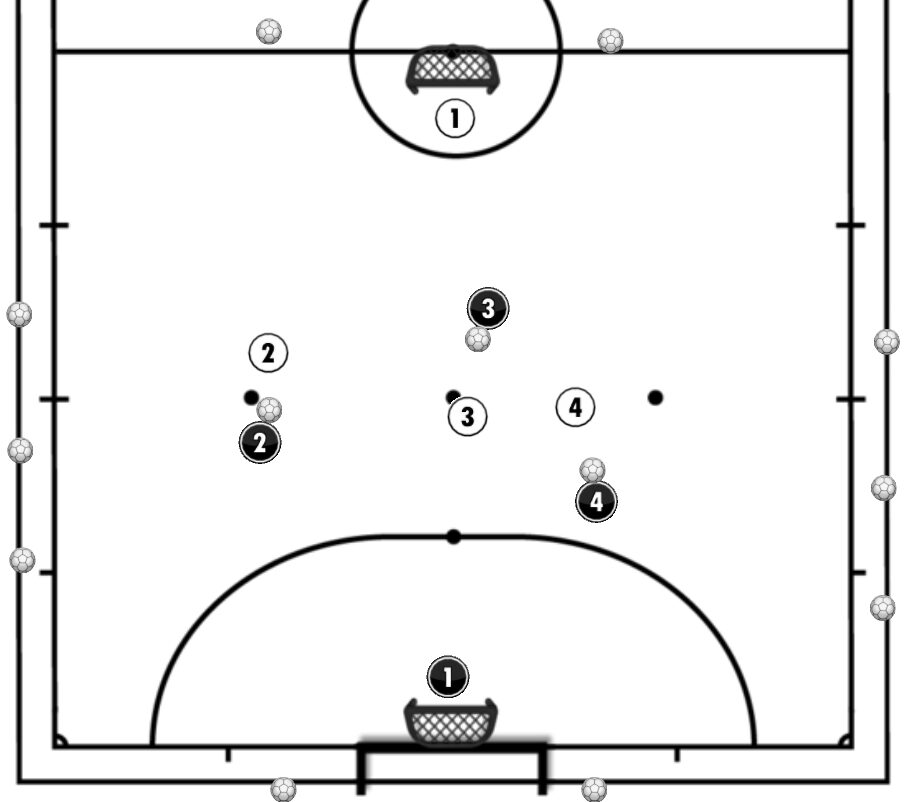 The main objective of the drill is to teach a player with the ball to create opportunity for a shot and shoot as soon as he has this opportunity.

Download the drill in PDF (for free) and take it to your next training session!

Futsal Pivot. How to play through pivot?

How to train legs in futsal? Futsal coaching

How to get out of high pressure in futsal?

How to score more goals in futsal?

How to warm-up in futsal | Analysis my own training session

FUTSAL SKILLS ONLY IN 6 MINUTES A DAY | Futsal footwork training.